The impact of Bullfrogs, Leopards and CO2 emissions

In the simplistic position in which all fossil-fuels are bad and that catastrophic climate-change is a few years away, gas is just another problem that has to be done away with.

However, in the real-world there are complex considerations that are lost in a binary, dogmatic world-view. The discovery of significant gas reserves offshore South Africa is a good case study.

Total and partners are currently drilling the second exploration well in the Block 11B/12B in the Outeniqua Basin offshore South Africa. The first well “Brulpadda” was drilled in 2018/19 evidencing a significant hydrocarbon accumulation. 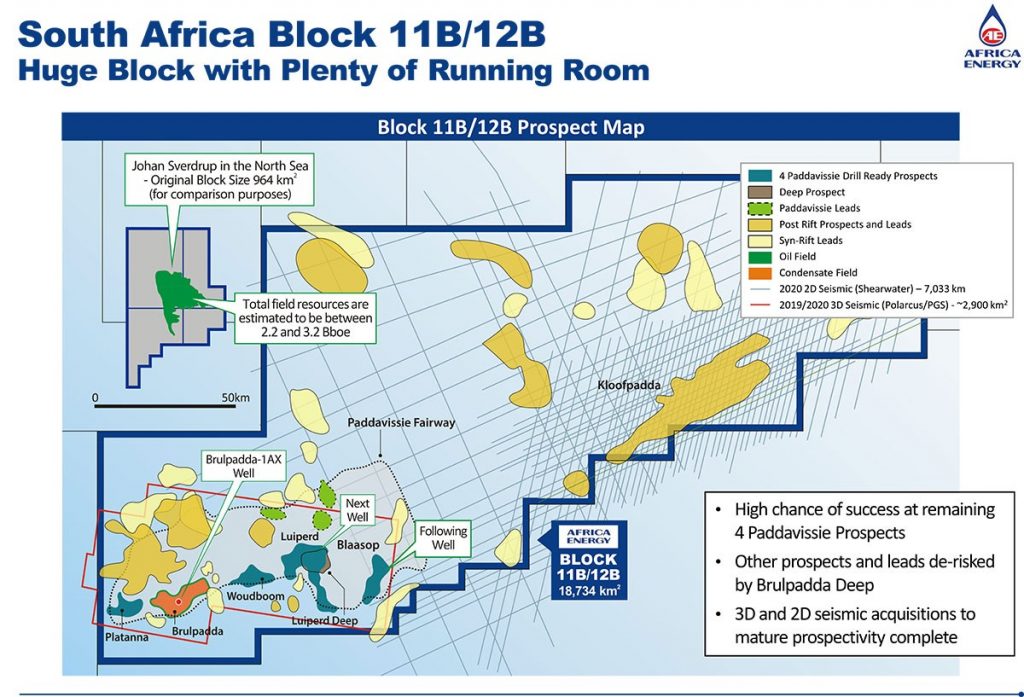 This discovery of a large gas-condensate accumulation was correctly described as a “basin-opener” – as it significantly de-risks four additional prospects mapped across the block in a classic “string of pearls”, including the current Luiperd well.   Whilst there is always the voice in the background that says “oil would have been better”, this is still a fabulous prize, given its geographical location. Finding wet-gas 175 km offshore of Port Elizabeth and the 60 million people of South Africa, is not inconsequential, and indeed has been rapidly hailed as a “game changer” by WoodMac

South Africa currently relies on its coal resources for about 90% of its 52 GW of electricity (NB coal is a smaller proportion of “installed capacity” but as a function of actual generation the 90% figure seems about right).

And this despite 2 million people having no access to any electricity at all.

The reliance on coal for electricity as well as world-leading GTL, is in many ways a legacy of the apartheid-era sanctions which forced RSA to be autonomous. South Africa happens to have vast coal reserves with known resources representing 170x annual production (and with over 20% of that production being exported currently). Due to huge economies of scale (production is concentrated in a few giant mines) and relatively low cost of labour (FX dependent) RSA also has some of the cheapest coal in the world.

South Africa is the world’s 14th largest emitter of greenhouse gases (GHGs). Its CO2 emissions are principally due to a heavy reliance on coal.

The fact that South Africa has an unremittingly awful electricity supply is not for lack of basic resources.

Abstracting from the mismanagement of the infrastructure, there is a very obvious opportunity to replace a significant chunk of the highest CO2 emitting kind of electricity production with cleaner gas-fired electricity generation.

But here ideology raises its ugly head – in the more extreme world-views all hydrocarbons are equally bad and should be shunned.  In the US the role of cheap gas in causing US coal (and hence GHG emissions) reductions has been attributed solely to the rise of renewables; whereas it is largely due to fraccing and the resultant excess gas (“primary gas” in the NE and “associated gas” in the more “oily” plays) pushing prices for natural gas way down – creating an irresistible economic incentive to make the easy switch (although probably not as dramatic as this image pretends – the rise of renewables has played a part also!)

In the same week that Brulpadda was announced in early 2019, the UK saw headlines screaming about the Glengorm gas discovery in the North Sea being branded a “disgrace” by Friends of the Earth.

Not immune to this woke pandemic, RSA has established an “Integrated Resource Plan” in which “the the nation’s total electricity-production capacity rising to 77,834 megawatts by 2030 — with the bulk of the increase coming from renewable sources — from about 52,104 megawatts.” (source). Whilst this is laudable, there is a much bigger (and easier) prize to grab by using the newly discovered gas (hopefully to be confirmed by Luiperd)

The net effect of this gas discovery should be a positive and significant reduction of GHG emissions – as has been demonstrated in the USA, an ample supply of cheap gas drives CO2 emissions down, even if you withdraw from the Paris agreement. This is in many ways thanks to the fact that from an engineering perspective it is relatively easy to replace coal by gas as a fuel for electricity generation in existing infrastructure.

Gas is often quoted as having half the greenhouse gas (“GHG”) emissions as coal – but this is an average which builds in the worst elements of gas production including methane leakages as well as flaring and venting. These are a huge embarrassment to the O&G industry and should not be downplayed.  However when looking at a direct swap of offshore gas for coal in the case of SA, the gas will have significantly better reductions than the quoted 50% of GHG emissions –  big offshore fields don’t leak/vent or flare – the safety issues would be far too great in this environment – not to mention the economic consequences.

Whilst the use of dom-gas in an energy hungry country should be the aforementioned “no brainer” there are several barriers.

Firstly, coal is not just a fuel for making electricity – it is the livelihood of about 92,000 miners (and of course extended families and dependent communities). Shutting coal mines in SA would make the UK miners strikes of the 1980s look like a picnic. However, as seen from the above, RSA needs incremental electricity, so even with significant gas resources, coal will have its place.

Secondly, the political winds fan the growth of renewables – which should and will have their place. However, for most South Africans electrons are needed, and simple, cheap, reliable and local gas should figure “biggly” in the Integrated Resource Plan: which it doesn’t. Focus on renewables distracts from the opportunity of gas.

Thirdly, Escom. Saddled with 600bn Rand ($37bn) of debt – the state electricity company is no position to do any of the above. A functionally and financially broke monopolistic purchaser of your gas must be causing a few sleepless nights in Paris.

There will be Gas

I am confident that Liuperd will be a discovery, and it is generally expected that the basin may get less gassy and more oily as it trends NE. Whatever the outcome (apart from “the one that can’t be named”), these exploration wells should be a massive boon for the economy of RSA and a lead to a significant reduction in coal usage and consequent GHG emissions. Having invested indirectly in this play through Impact Oil and Gas and Africa Oil, I hope it is a great success.

The question is: given the positive impact that this will have on the UN SDG7 “Access to clean(er) and affordable energy”; can this be considered “Impact Investing” – or is it still non-grata because it is fossil fuels?