Such Stuff as Dreams are Made On

It is normal to want to live in harmony with nature and the unrelenting negative news about climate and CO2 and energy speaks to this. Exciting examples of how things are being done create expectations about how the system should change but also create exasperation about how slow progress is. But the use of flagship projects should be managed with care – these are often in the news because they are the exception, not the norm.

A while ago, there was a widely-shared video of a huge truck carrying quarried rocks – the electric truck was painted green (of course) and to much adulation was reported to “never need charging”.   Factually correct because the specific circumstance is that the quarry is high on a hillside and its destination (a cement factory) is in the valley. The truck uses regenerative braking to charge its 600kw batteries, and the charge is sufficient to get it back up to the quarry. Magic. The nuance is of course that it carries load down and comes back up empty; thus the losses in generating and storing electricity are compensated for by the additional kinetic energy provided by gravity on the way down – the unladen truck weights 45 tons and carries 65 tons of material – so is 110 tons on the way down and 45 on the way back up.

In many ways this is not too different to counter-weight systems like funicular tramways or building elevators – only here instead of a mechanical transfer with friction losses and a “top-up” of input energy, there is an electro-chemical transfer (with associated losses but net gains).  The laws of thermodynamics still hold.

This is a great example of cherry-picking, or rather, highlighting specific examples which have little relevance to the challenges faced in the energy transition. The utility of regenerative braking is clear and widespread application in EVs will contribute significantly to energy efficiency in transport.  But the “never needs charging” truck itself is an outlier.

A rather extreme anecdote as to why managing expectations should be part of a journalist’s remit is a conversation I was party to a few years ago. One person was extolling the value (and virtue) of their hybrid car – and in particular the regenerative-braking system charging the battery. To wit, someone said “that’s awesome, so if we all lived in the mountains, we cold all drive for free”. I thought they were making a joke, but apparently not.

As CP Snow – a polymath with both literary and scientific accomplishments noted in his lecture The Two Cultures, it is normal and acceptable that educated people from a humanities background have no grasp of even basic thermodynamics, yet those same people would pour scorn on scientists for not have a similar grasp of basic literature or music (I am paraphrasing for brevity, see here). Yet without a basic understanding of the physics, the debate about energy can go off in very odd directions (Hydrogen being a current one that I shall return to in the future).

Leading from the front

In rock-climbing, doing the first ascent of a route is very prestigious, but frequently even the hardest routes get a second ascent quite quickly thereafter. This is partly the needle of people’s competitive nature, but also the fact that a psychological barrier has been taken away. Once a route has been “sent”, it goes from impossible to possible, so the repeat comes quickly.  There is a strong analogy to how pioneering technology breaks through barriers of what is possible. Tesla is a good example. In some ways it doesn’t matter whether it is a Ponzi scheme that goes bust or if it becomes the world’s most valuable company – ultimately the legacy will be that it took EVs from being a joke (see Top Gear from a few years back) to being desirable and aspirational, and to now becoming mainstream.

Norway is thought of in much the same way, as it pioneers adoption of EVs on its roads and “shames” other oil producers because Norway’s industry has the lowest CO2/barrel anywhere in the world. Leading so others may follow: only it’s not that easy.

Norway is special – it has a geography and climate very well suited to hydroelectric power, a small population, a large and very well managed offshore oil and gas industry, a consequent huge sovereign wealth fund and a rather over-inflated sense of green leadership that borders on hubris – at least in the press. Apologies to all my Norwegian friends.  Yes, we all know that Norway has the highest number of EVs (per capita) by quite a long way – but we also know this is paid for by the oil and gas revenues of the last 60 years.   The electricity that fuels the EVs is 95% from legacy hydroelectric, so is very low CO2.  I think you can see where I am going with this – the Norwegian model will be extremely hard to replicate elsewhere, and as such cannot act as a role model for paradigm change.

In the oil and gas industry, the Johan Sverdrup field (Equinor operated, with Lundin Energy as finder and non-op partner) is front-cover material for modern ESG. The offshore facilities are electrified and supplied by the onshore hydroelectric – thus, low-carbon electricity from Norway’s grid. Laudable, but rarely repeatable. Indeed, highlighting the “virtue” in this development is arguably counterproductive for the industry as a whole as well as for the companies involved. For the industry it sets a benchmark that can’t be met elsewhere where geography and geology are less amenable, and for the companies involved, they are painting themselves into a corner. Any future projects (organic or M&A) will be judged against this benchmark. Given the outlier position of Johan Sverdrup, this must preclude almost any future project without increasing their average CO2/bbl and tarnishing their reputation?

On the other hand, this CO2/bbl benchmark will force everyone else to try to get closer, which is not a bad thing – so long as expectations are measured to reality.

One can’t blame them for trying to use this case-study for PR – contrast this to the rather economical description of the Akpo FPSO offshore Nigeria as “the world’s first all-electric FPSO”…. True, but where does the electricity come from… ah yes, six huge Wärtsilä duel-fuel (gas-diesel) gen-sets on board. Ho Hum.

Neither the EV/capita statistic nor the CO2/bbl should be held up to shame others – Norway and its energy is an accident of geography and geology more than policy and virtue.

Cheapest Solar in the world

Abu Dhabi Power Corporation (ADPower) says it has secured the world’s lowest tariff for a solar power plant… The utility says it has received a bid of just 1.35 U.S. cents per kilowatt hour (kWh) for the project.

This is a landmark deal – but is it relevant?

In the same article BNEF is quoted as noting that a decade ago solar was at about 30c/kWh – so this is indeed a remarkable decline – and is used as part of the “deflationary” narrative, that renewable electricity is becoming so cheap that it will inevitably and immediately disrupt the entire world energy system.  As with my previous examples the numbers don’t lie, but the context is important. 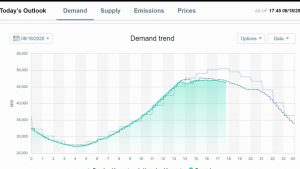 Its not perfect – this was demonstrated in California in the summer of 2020: solar power decreases rapidly in the afternoon, whereas heat (and electricity demand for air conditioning) remains well into the evening and night. This mismatch has to be managed by alternative dispatchable power sources (generation or storage), but is not insurmountable – and overall, it makes enormous sense in Abu Dhabi to not burn fossil fuels for electricity given the ubiquitous sunshine. In short, the net-energy from these solar panels will be positive over their lifetime (I don’t have any numbers, but it seems reasonable, and will be net negative CO2 even if built using Chinese coal powered manufacturing), and the cost/price/value is possible as there is a direct application to instantaneous electricity demand.

Northern Europe does not suffer the extreme heat of Abu Dhabi but is rather more concerned about cold in winter (deaths related to cold outweigh deaths from heat by several orders of magnitude currently). Whilst there are sunny days in winter, the norm is often cloudy and rainy. But due to the high latitude, the solar radiation is low even on sunny days – and of course non-existent in the evening. It has been noted that a proposed solar array in Kent (which is pretty sunny by UK standards) will have a negative net-energy footprint over its lifespan.

In the UK solar generation is best in summer, which is of course often windy and poorly matched with demand – hence we see curtailment fees being paid to not produce electricity. Demand for electricity peaks in the UK on cold and dark autumn and winter evenings. This mismatch of timing means we see significant demand for alternative generation capacity (and in the minds of many battery-storage, but this remains trivial in the real world). These two factors: (1) the low conversion efficiency in high latitudes and (2) the need to have standby capacity mean that Abu Dhabi style pricings are (IMHO) very unlikely to ever be relevant to the European energy transition. Likewise, solar makes sense in Arizona and Texas, significantly less so in Canada. 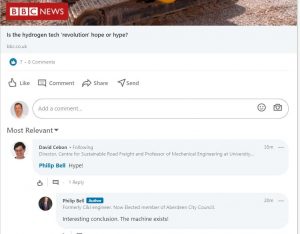 As I am writing this, I have seen the attached in my Linkedin feed – a great example of “one swallow doesn’t make a summer”, one JCB machine doesn’t presage a revolution. The fact “the machine exists” is nice, but is it relevant? With enough funding anyone can make a prototype or pilot.

In the same way it is possible to draw a line through two points and extrapolate to infinity, its is possible to take dramatic and appealing cases and imply (if you are a journalist) or infer (if you are a reader) that these should be the norm.  I am not writing this post to knock any individual project, but to make the point that there is something a disingenuous and potentially dangerous about hyping outliers that promise salvation but have limited possibilities of scaling.

These are the stuff that dreams are made on, but unrealistic promises also serve to promote a popular vision of the future. Promoting “solutions” simply delays the day in which hard questions about inevitable lifestyle changes must be asked. Getting to those questions as a soft-landing from an informed debate may be less disruptive than arriving via a hard-landing as un-kept promises unravel.

ELENA ANDREYEVNA Yes, of course. It seems to me that the truth, whatever it is, is all the same not so terrible as being in darkness. You can rely on me my dearest.

SONYA Yes… Yes… I’ll tell him that you want to see his plans… No, it’s better not to know… At least there is hope…

ELENA ANDREYEVNA What are you saying?

SONYA Nothing. (She goes out.)