So Long, Nerds – A Meditation On Gaming

I’m taking a break from writing about energy today – sometimes you just need to switch off and clear your head.

Seeing teenagers on their video games brings out a range of reactions – they “are a waste of time”, “full of gratuitous violence”, “disconnect from nature” and for me they bring a hint of envy. Envy that I didn’t have such amazing games when I was that age (in fact I’m so old I almost pre-date the video game concept…), and envy at their youthful skill, speed and dexterity.

Having deliberately never played video games, knowing their addictive power and my weak will – I have recently succumbed and joined in. It was a slippery slope from Clash of Clans to Minecraft, then to PS4 and FPS games.

So what have I leaned?

Firstly, that youthful skill, reaction speed and dexterity are real. One of my sons shows me video of his game-play of Overwatch – he slows it to quarter-speed and I still don’t see what happens. I can’t compete 1-on-1 with anyone over the age of about 7. I’m all fat thumbs and scanning the keyboard for the right keys to press. Meanwhile they are doing crazy combo sequences, super-jumps, side-slides and no-scope shots. I die a lot, no, really, like A LOT. However, with a bit of strategy and cunning I can be not the worst, but never the best.

Thirdly, and the subject of this post – it is very meditative – which may sound odd given the high-octane level of activity. Meditation is usually associated with quite and calm; sitting in a full-lotus next to a burbling brook, quietly calming the voice in your head. Becoming aware of the nagging narrative, the returning thoughts, of the discomfort of the sitting position, and then acknowledging these thoughts and coming back to the “moment”.

Quieting the inner voice is perhaps the hardest part of mediation. It takes years of practice to attain a semblance of this. Our inner chatter is part and parcel of who we are. In fact, without access to thinking-by-using-language, there may be no thinking at all. There is an experiment that shows how very young children can’t connect logical ideas (including spatial awareness using visual clues) until they reach an age where language is sufficiently developed.

The experiment was done by Elizabeth Spelke who is a psychologist at Harvard. The ideas and this experiment are described in “A Thousand Days of Wonder” by Charles Fernyhough, and introduced mid-way through the RadioLab podcast “Words”. Language and thinking are very linked. In an extension of this idea, adults were tested on simple tasks whilst their language centers were otherwise occupied – leading them to fail miserably in the simple tasks.

“Everybody has always talked about how language is this incredible tool for communication that allows us to exchange information with other people so much more richly and affectively than other animals can.  But language also seems to me to serve as a mechanism of communication between different systems within a single mind.” (Elizabeth Spelke on the RadioLab podcast)

There is even a theory that in early human civilization the myriad stories of people being told what to do by “the Gods” – was in fact the inner-voice being mis-attributed. Humans were developing complex language and this was enabling verbal thinking – but it was new and unusual and “heard” as an out-of-body source. Stretching the theory further this may be the point of the origin of consciousness – although this is highly contested.

So how does the origin of consciousness relate to video gaming? Simply put, the intensity of the games leaves little room for the inner chatter.

When playing you get very adsorbed by the game – in itself one of the dangers – in which the virtual world is more intense (and in some ways “better”) than the real one. There is a sub-culture of gamer banter – one example is good players being accused of having “never touched grass” – a reference to never going outside (not a reference to weed). Which then leads to this kind of joke: 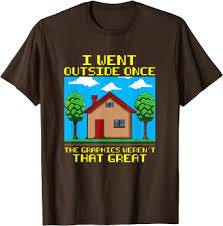 A player is too good and suspected of using hacks – and we are told they “just have a good gaming chair” (since this obviously makes no difference to one’s game play). If anyone complains about anything: “skills issue” and “get good” are the retorts.

School lessons have been described as being essential breaks from the extreme social pressures of breaktime (“recess” in North America). Whilst this is deliberately provocative, it underlines the huge stresses that adolescents have to deal with – increasing responsibility, academic intensity as well as puberty and all that comes with this. Always-on social media has worsened the dynamics – no escaping into a good book, just more pressure.

I have had an understanding with my kids, that whilst their studies are going ok, and that there are non-screen-based interests – gaming would be allowed at home. I am wary of the addictive nature of the games, but I also understand the haven that they provide, the “safe harbour”, the place to “switch-off” at least for a while. That I take an interest in their games helps bond – its not the same as climbing a mountain together, but valuable none the less.

Added bonus, my 10 year old flexes that he has a “gamer dad” – which apparently goes down well with his peers. Good thing they don’t know just how bad I am!

So “Get Good” y’all, and once I have upgraded my gaming chair, I’ll get back to writing about energy.