Kafka On The Offshore

Magical Realism or a Cunning Plan ?

UPDATED: having found an error in my numbers – on the % increase of wind (overall a 2x from today not a 4.5x as per the original form of this article – the 4.5x is the planned increase in the offshore wind capacity) – herewith a corrected version – apologies.

The British government has announced a “bold” “ambitious” plan to “boost Britain’s energy security … Bold new commitments to supercharge clean energy and accelerate deployment, which could see 95% of Great Britain’s electricity set to be low carbon by 2030”

2030 you say? Thats less than 8 years away… Looking back 8 years, 2014 was the year that the Tesla model S was launched in the UK. I don’t recall 2014 being that different to 2022 in terms of the whole industrial-energy system, but OK, let’s leave that thought hanging there for a moment.

So what is proposed? If we cut out the word-salad and ignore terms like “ambition” and “where possible”, “we will look to”, we can focus in on the numbers.

Whilst there is also text concerning heat-pumps, oil and gas production, and hydrogen, I will focus here on the electricity generation part only and look at installed capacity and actual generation.

Again, just for reference, the current 10.4 GW of offshore wind comes from 2,297 turbines. Whilst turbines are getting bigger, we can estimate that this would need to increase to roughly 10,000 to achieve the 50GW target.

Installed Capacity is of course a poor benchmark as it does not relfect the firmness or utility of the generation. But as a headline, the UK has just over 105 GW of installed capacity currently, for a demand that rarely, if ever, exceeds 43 GW. This is a big over-build already, far more than the traditional Reserve Margin of 15%-20% above peak demand. This is reflected in low capacity-factors which can be back-calculated from the ratio of theoretical TWh and the actual TWh produced over a year. Solar comes in at 11%, wind at 30% and natural gas at 39%.

So, if we already have installed capacity of over 2x peak demand, why do we need to do a 2x in wind, 5x solar and a 3x on nuclear? All that because we can’t plan on ensuring reliable and cheap gas?

Assuming that new nuclear won’t be available by 2030, how much wind and solar would we need to be at 95% renewables?

To answer this, we can’t simply look an annual averages, because as the proportion of renewables increases so there are periods where generation will exceed demand and -in the absence of storage at orders of magnitude above anything available today – these will lead to curtailment (I’ll come back to this later).

By looking at data from Gridwatch which is in 5-minute intervals for the whole of 2021 (4 months shown above for illustration) we can see that with the current configuration renewables managed to provide up to 80% of the UK demand in the very best 5 minute intervals (averaging about 60% over a 24 hour period – which is what the headlines report).

In the 2021 data there was no overall curtailment above 100% of demand. In fact, for the year, wind and solar contributed 22.8% of the electricity. However, if you increase “installed capacity” of wind and solar in the spreadsheet and calculate the theoretical output (pro-rata to the 2021 actual data), there are time steps where generation starts to exceed 100% of demand. Demand “caps” the generation and there is now a bucket of “excess” power. By the same token, there are still many time-steps where legacy generation has to provide. As the over-build increases, so there is more “excess” and less “legacy”. By summing all the 5-minute intervals for each over the year, we can see how this becomes asymptotic. 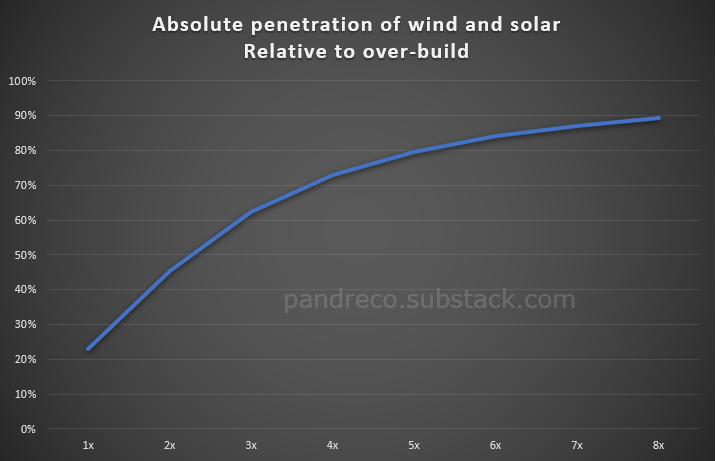 Plotted differently, we can see that it is not until we have a 3x over-build (relative to 2021 infrastructure) that we start to see modest amounts of excess energy – although there are significant reductions in the requirement of legacy generation (and thus emissions) in these early steps. 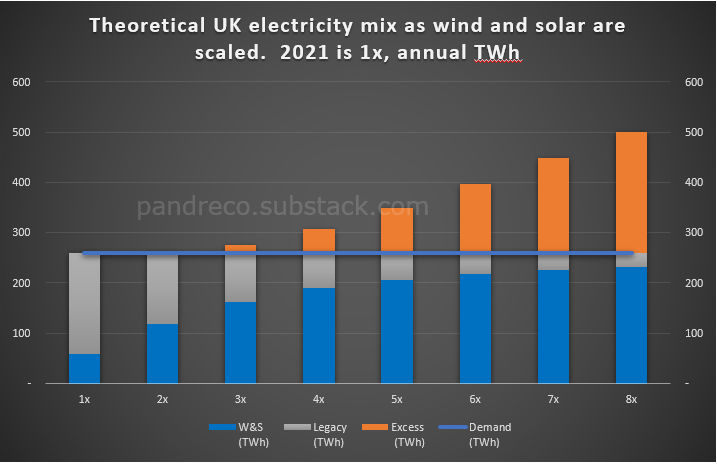 A crucial point is that these increasingly rare requirements of legacy generation are typically on cold winter nights – so are essential for society. It is also worth noting that there is increasing cost in the final steps for limited gains – and this should be considered when planning a “net zero” outcome – how good is good enough?

The Boris plan calls for 2x wind and 5x solar – so this would sit between the 2x and 3x bars on the above chart. At this point the system would be 54% renewables with almost no TWh of excess generation. Not quite the 95%.

If the build out is greater and/or there is a wedge of nuclear – we could maybe get close to the 5x scenario.

Which is where (I assume) that hydrogen comes into the discussion. If (and it is a huge “if”) the excess generation could be converted into hydrogen for use as storage, then it would (theoretically) be possible to further reduce the need for legacy fuels. At this point its getting well beyond the scope of a spreadsheet – but the 73 GWh of excess at a 5x over-build with a 40% roundtrip efficiency (electricity-hydrogen-electricity) could bump the “renewables” share up to 90%.

So far it kind of looks more like planning than theatre. However, this is a very theoretical analysis just playing with numbers in a spreadsheet.

Specificlly, major concern with all of this is the costs.

In addition, I have assume constant demand – something that seems very unlikley as we “electrify everything” – in a case of higher demand, clearly the percentages of renewables will drop relative to a flat-demand scenario.

95% green electricty by 2030? – whilst conceivable using a spreadsheet, I remain of the opinion that it is mostly magical thinking.