Brexit, Pursued By A Bear

The Balkanization of Global Energy

“Why should Sweden continue to supply cheap electricity to Germany if Germany choses (in the face of all logic) to shut its three remaining nuclear power plants?”

We are now sadly familiar with energy being used as a weapon (although I remain baffled by the “surprise and outrage in Brussels and London) as Russia discovers unexpected “maintenance” on key gas infrastructure, and in all probability will rinse-and-repeat with oil supply.

But what happens when countries start to look at their own energy security and how it is being undermined by poor choices made by their allies?

A worst-case scenario is a Balkanization of the global energy system, in which there will be few winners and many losers.

In July the huge Freeport LNG plant in Quintana, Texas caught fire and 2.1 bcf/day of LNG export capacity went offline.  Terrible timing given that Europe was trying to refill its winter storage.  But it had an interesting effect at home – US natural gas prices slumped from $9/MMBtu to about $5.5/MMBtu. 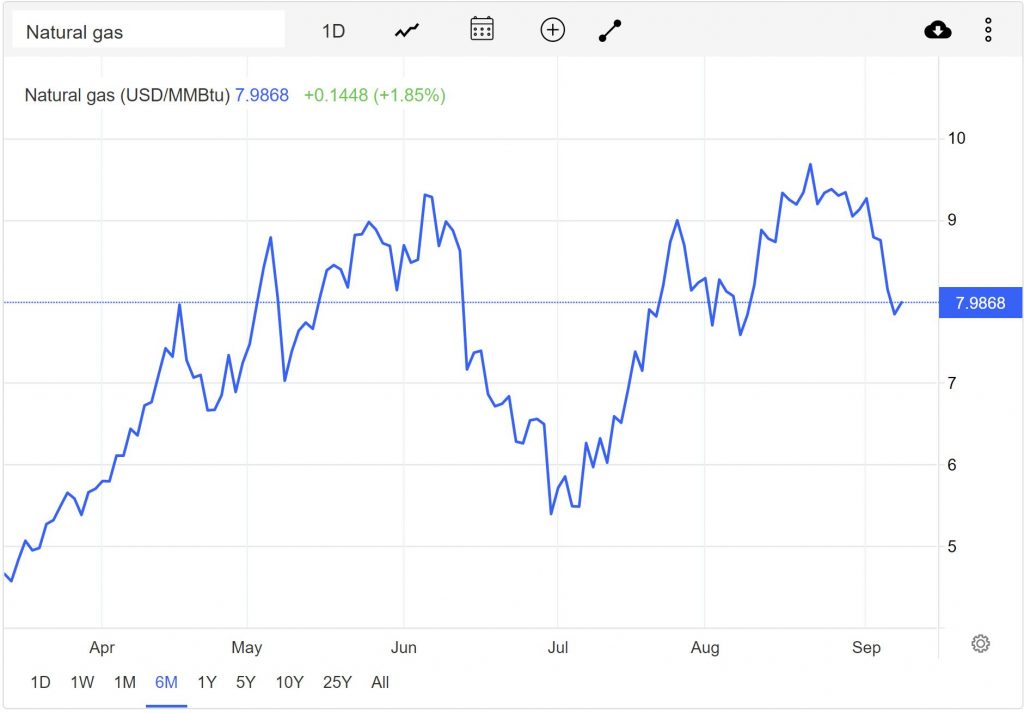 At the same time gas prices in Europe jumped from about EUR 80/MWh to EUR 120/MWh, before going stratospheric. 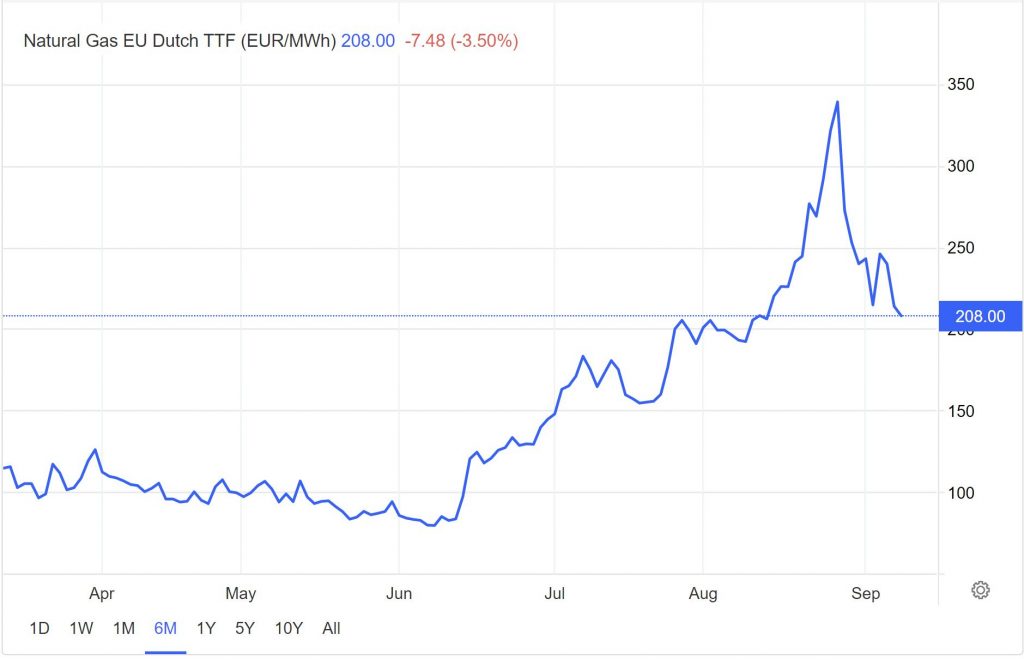 What this shows is that there is a huge arbitrage opportunity between the adequately supplied US market and the under-supplied European market.  When the export facilities were open, the US price was pulled up towards the European (and Asian) prices (which were converging down as the arbitrage was being met), and conversely, when Freeport LNG shut down the US market settled back to its adequate/over supply price-level and Europe scrambled for gas at any price – outbidding many poorer nations in the process.

Electricity prices in Southern Norway have increased tenfold, despite Norway being self-sufficient in electricity generation (dominantly Hydro) as well as being a major exporter of oil and gas.  Again, we can see the effect of price arbitrage in an open market.  Norwegian hydro electricity companies can make much more money selling power to Europe via an interconnector cable than supplying its domestic clients.   The maximization of company profits has two compounding effects – firstly domestic customers are forced to meet external price drivers or go without, and secondly, the long-term management of the Hydro resources is not a consideration when you are looking at 5-minute or hour-ahead electricity sales prices.   Add in a low rainfall season and you have 10x price rises, and real concerns about the ability to keep the lights on at home in the event of a dry autumn.

Three short words, an emotional and nationalistic appeal that played a big part in the UK choosing to leave the EU via the now infamous Brexit.  It is a little ironic that at the same time as casting-off from the EU, the UK was increasing its reliance on imported electricity as it hurried to shut (and rather short-sightedly, demolished) it’s coal-fired power-plants and procrastinated on new-build nuclear.

Whilst the phrase “take back control” was not invoked in relation to Energy Security – probably because in 2016, nobody had any idea that Energy Security was a thing – it must sound pretty hollow today as the country has to borrow £130bn to pay for *one*years’ worth of energy security.  Descending into a debt spiral is hardly a manifestation of control.

During the energy shock of the 1970s, the UK needed an IMF bail-out – this is not inconceivable in the years ahead.  So much for control.

But away from the UK, one can look at all these pieces of news and see a bigger picture.  The USA must have noticed that exporting LNG makes great money for the LNG companies, but consequently pushes up the cost of domestic natural gas for all retail and business customers.  Sure, it’s not a 10x, but even a 2x hurts.  And its not as if the US under Trump didn’t warn Europe (Germany in particular) that they were dangerously dependent on Russian gas.  Given the self-destructive tendencies of Europe, there must be an argument for restricting exports.  Oh wait, that’s exactly what Jennifer Granholm, the “I’m not waving, I’m drowning” Secretary of Energy suggested for refined petroleum products

“Given the historic level of U.S. refined product exports, I again urge you to focus in the near term on building inventories in the United States, rather than selling down current stocks and further increasing exports,” (Reuters).

Crude oil and LNG next?  Fortress North America could be energy independent – at a cost no doubt – but Europe has no such option.  Desperately wishing for energy independence through wind, solar and hydrogen is not going to ensure the industrial might of the European economies.   Without access to affordable energy, the deindustrialization of Europe will gather pace – which should scare the heck out of everyone who likes their current lifestyles.  Once started, this can be a precipitous spiral of decline.

On the other hand, Canada is playing a blinder.   Given that Europe (and Asia) will pay 5x-10x of North American prices for natural gas, Canada has seen the longer-game and has decided to hoard its natural resources rather than succumb to the more obvious profit-motif (with side benefits of helping allies-in-need).  Smart, we may well need them in the future; assuming that is that the USA doesn’t also see Canada as part of it’s strategic reserve – that southern border is kind-of porous.  Just saying.  Disguising this as “no business case for LNG”, and “maybe have some hydrogen that doesn’t exist yet” is a very diplomatic way not saying no, but strategically hoarding for the future.  Well played.

Norway is re-considering its policy on being “the battery of Europe” (hint, it was never of scale to do this).  India has made clear that their duty is to focus on energy affordability and security for their citizens, and to the detriment of Ukraine and the European/G7 solidarity front it will buy discounted Russian crude (as will many others).

France will be returning its Nuclear fleet to service this autumn, but it is unlikely to be at the prescribed pace –  which will leave France’s own electricity very tight and again, there will be serious questions about European solidarity vs riots on the streets at home.

For richer countries it is a question of price and political will.  For poorer countries who are being priced out of the market it is about going-without.

The energy crisis, which has been in the making for a decade or more (albeit viciously sharpened by the Russian invasion of Ukraine), will be a critical test of the resolve of nations.  Solidarity vs self-interest is the most obvious question, but a bigger one lurking behind is whether the critical importance of cheap and reliable energy – something that will have generational impact on countries’ fortunes – is recognized as what it is.  Cheap and affordable energy is the economy.  Without it you have decline, immiseration and unrest.

The Balkanization of energy and trade is a very real danger as our systems that we have taken for granted for so long undergo extreme stress.  Ultimately there will be winners and losers.

Those who have access to cheap and secure energy will be winners – doubly so if they can export.